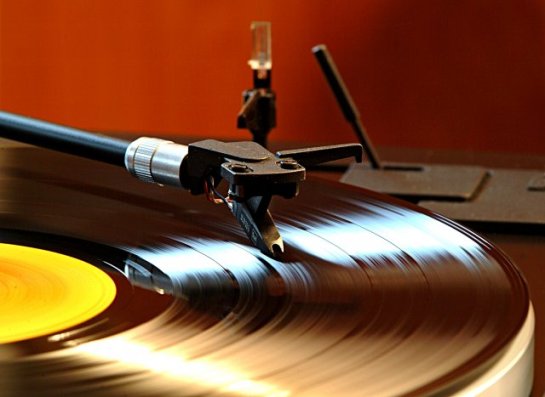 I would spend hours spinning the dial and watching the vinyl spin. My life developed in the spaces between the stations and between the grooves.

Something was always playing, in the house or the car, on the radio or on the turntable.

My parent’s record collection was vast and varied: Sinatra, Torme, Judy Collins, Simon & Garfunkle, The Beach Boys, Bach, Barry Manilow, The Carpenters, Elvis, The Monkees. It seems they were always listening to a record, and nearly every childhood memory I have comes with a sonic association.

I set up my record player in my room, and with that my room became a neighborhood bar. I made a neon sign by shining a flashlight through a straw, and the house special was water in Dixie cups. My parents were regulars, and they were treated to regular doses of Bill Haley and the Comets.

The Oldies obsession stuck, because I was a regular listener of WJTO Brunswick. I used to call my favorite DJ, Candy, and ask her to play Mark Dinning’s 1959 hit “Teen Angel.” I love the fact that at five and six years old I was obsessed with a song about a girl being hit by a train. Years of neurosis and couch time would follow, likely due, in part, to this grim special dedication I gave myself.

The first record I bought myself, at the long lost DeOrsey’s Records, was AC/DC: “For Those About To Rock (We Salute You).” It was 1982, and this record nicely supplemented the 45s I was obsessively collecting: Anita Ward “Ring My Bell”, Paul Davis “65 Love Affair”, Greg Khin “The Breakup Song.” My father was kind of pissed at me blowing my money on such trash, but that shimmering copper cover held sway, and my AC/DC obsession was born. Next stop: Ozzy.

The early 80s are a wash of sonic emotion caused by big creamy guitars. This is when I first started noticing guitar players and what they were playing. Elliot Easton’s massive sounding solo on The Cars’ “Since You’re Gone” and the emotive melody of Steve Clark’s solo on Def Leppard’s “Bringin’ On The Heartbreak” just hooked me in: the tone, the feel. I started reading about, and dreaming of playing, Gibson Les Paul’s through a wall of Marshall amps.

And then I started doing…

I have made many suspect life choices, but never a bad sonic choice. I had a good, solid aural foundation, and from that I became an obsessed
listener: a deconstructionist, constantly tearing down songs to hear how and why they work – the composition, the instrumentation, the mix – and a reconstructionist, constantly rebuilding songs into my own interpretations. And it all started in those magical childhood spaces between the stations and the grooves.