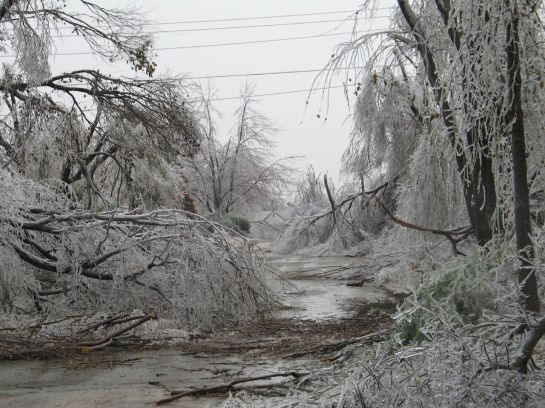 String those three words together around anybody who lived through it and watch the cringes and shudders. It was catastrophic, deadly, destruction on a scale previously unimaginable. It came on suddenly on a balmy day in January 1998, and it threw our world into primitive chaos for weeks afterwards. You had to live through it to believe it.

I was in Boston, trying to get home to Maine for a few days. January 5th was warm, with a light rain. There were rumblings that it would get colder, especially up north, and ice might be a factor. Little did we know.

I talked to my dad before getting on the bus, and he suggested I get to Portland, get a room and he would pick me up when he could: things were getting bad up north as the temperature started to drop. The entire trip was a cacophony of rain and ice, increasing in intensity against the metal roof of the bus as we inched northward. This was the sound of impending disaster.

I got a cab and headed for the Swiss Chalet in Westbrook, two miles away from the bus station. I checked in, and would remain trapped in my room for the next three days. And I was one of the luckiest ones in town.

Power was lost immediately. The weight of the ice on the trees and power lines caused a swath of crystalline destruction from New England far into Quebec. Power transformers were crushed and crumbled, wooden electrical poles were snapped like toothpicks, and entire forests were sagging and begging for mercy. And roads were completely impassable.

The Swiss Chalet had power, so I hunkered down, escaping only to eat at the adjacent Denny’s or to skate across Brighton Avenue to the Shop ‘n Save for beer and smokes. Literally, skating in the middle a major thoroughfare in my hiking boots.

Finally, after three days, the roads were cleared barely enough for my dad to get me. My parents had lost power at the beginning of the storm, and now I was joining them. It would be another eight days before I would know electric light and power and bathing water again.

For eight days the power company worked 24/7 to get electricity restored, and crews worked 24/7 to get the roads cleared of fallen power lines, trees and other detritus. Still the cold held on, and the omnipresent ice glared in the sun, and even in the dark.

We could occasionally get into the nearest town, Gardiner, for provisions, but with no electricity, it was mostly non-perishable, easily disposable fare. I choked down cups of Nescafe Crystals brewed on the woodstove and dreamed of three squares and a hot bath.

My friend Dana, a Korean vet who lived in a cabin in the woods, had given me an Army-issue winter coat that he had worn during the Battle of Inchon. It is still the warmest garment I’ve ever had, and I wrapped myself in it while hovering beside the woodstove over those eight days. I also warmed myself with nips of Jim Beam, and wished I had a hound dog to sit at my feet and complete my Jack London fantasies.

And then it was over. Power was restored, life went on and suddenly it was summer, then it was a year later, then five years later, then ten. But nobody who lived it will ever be the same, and we will never take a day of normalcy for granted. If you survived The Ice Storm, you know. You had to live through it to believe it.